Coupang is one of the platforms that has become even more familiar to us as the COVID-19 situation is prolonged. But the company was deceiving both the sellers and consumers, being the only winner through the “item winner” system. It was more widely known when a TV program, <MBC Straight>, covered the issue by the episode “Coupang, the secret of the knockdown price”. PSPD reported Coupang that deceived the sellers and the consumers by unfair terms and system to FTC on May 4th.

Coupang puts “competitive price” before many other requirements for a seller to become the item winner. This is a system in which just one cent difference makes the lower priced item to be the item winner even if it is exactly the same good, and the winner inherits the former winner’s picture of the representative good and all the consumer reviews attached to it. To earn back the picture, reviews, and scores consumers filled out, the seller has no other choice but to drop the price even more. Although the picture and the reviews are important information for choosing the product, the system may mislead the consumers to confuse the information that belongs to something else as the one they put in their carts. Moreover, Coupang required the sellers to yield content data, including its trademark, the company’s name, description, and pictures over to the company through the terms and conditions.

After PSPD reported the company to the Commission, many sellers and customers sent us messages of their cases and encouragement. Coupang came up with counterarguments, but it still failed to clarify the main points of PSPD: the low price to be the absolute standard under the current system, consumer damages from misconception, and infringement of intellectual property rights by the terms and conditions. We will thoroughly examine the damage cases resulting from the system and make efforts to come up with legislation to exterminate unfair business practices of the online platforms. 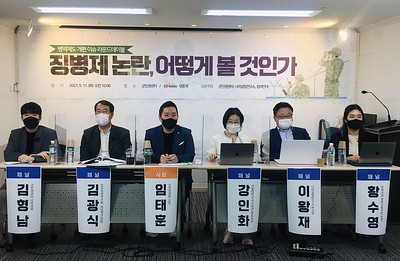 On the roundtable, the scholars and activists emphasized that security conditions, needed number of troops, military strategies, the system of the military, and budget should be considered for the reform, and the transition to the voluntary military service should be decided thoughtfully after examining issues such as improvement of the human rights condition of the military, strengthening democratic regulation, how the military sector is privatized and minoritized and others issues, in combination. For this to take place, sufficient information on military strategies should be made public before this project, and there needs to be a forum of specialists from various fields that are not just limited to military sectors.

In order for the long-term transformation of the military system to happen, “the appropriate number of troops” that are needed for the Korean army has to be weighed before anything else. It is because the current number, 500 thousand standing forces, is too much. Referring to the results of various studies, the standing force of ROK can be downsized up to 300 thousand, and the period of service can be shortened to 12 months. PSPD will continue to research and suggest ways to improve the military system from the standpoint of peace and arms reduction, towards minimizing troop numbers and sacrifices.

We ask for Artificial Intelligence Policies that Guarantees Human Rights, Safety, and Democracy

AI(Artificial Intelligence) is everywhere, from suggesting and providing goods and services to evaluating people and participating in decision-making processes in sectors including labor, finance, social welfare, public peace, and the military. Thus not only it greatly influences the human rights and safety of consumers, workers, and the people, but AI technologies that are not approved safe could also put our lives at risk. Just three months ago, Korean society witnessed through the chatbot “Lee Luda” controversy, how an illegal, biased and irresponsible product of AI can misuse our personal information and reproduce the hatred existing in the society.

120 civil society groups including PSPD, Jinbonet(Korean Progressive Network Center), and Minbyun(Lawyers for a Democratic Society) held a press conference to ask for “Artificial Intelligence Policies that Guarantees Human Rights, Safety, and Democracy”. The participated groups asked every AI system to abide by the Constitution law and other laws to protect personal information and prohibit human rights abuse and discrimination, and for there to be legislation for a national monitoring system for AIs that can make the related information available and control the danger entailed to the AI.

The government recently presented policies for AI in a series, led by the departments to promote industries, but one concerning point is that rather than a way to guarantee human rights, safety, and democracy, it is going in a direction close to the requests from the industry. The civil society groups that came together for the joint declaration for AI will deliver the views of the civil society to the National Assembly and government departments, and continue to push for a system that guarantees fairness, transparency, and responsibility in AI.

Retreating Clause, such as the limit on referential entrustment condition, should be put back 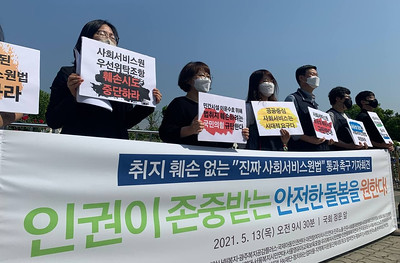 Substandard services and poor treatment of workers in the social service sector such as childcare and for the elderly, which are mostly run by the private sectors, have long been a serious social problem. The government promised to establish organizations for social service to widen the public social service sector and provide better services and tried for demonstration projects in a few regions, but the lack of legislation to back it up caused some management problems.

Last May 21, the legislative review subcommittee under the Health and Welfare Committee in the National Assembly passed the Social Service Facilities Act. The act first came on to the table in the 2018 20th assembly, just to be discarded without a proper discussion, and finally passed in eleven months since it was submitted again in the 21st assembly. It is fortunate that policies for the social services facilities that were hovering amidst the lethargy of the government and the parliament took a step towards establishing a legal basis. However, it’s a shame how the essential clauses are left out.

The People Power Party and the private organizations asked to delete the clause that said the local governments should prioritize national and public agencies when outsourcing social services by excessive infringement over to the private sector. The clause was, in the end, changed to be limited to agencies that the private sector avoids and the obligation requirement became voluntary. This retreat of the key clause is putting private interests before the people’s rights to care. The bill should be complemented again so that its policy goal, strengthening public characteristics of social service, can be fulfilled. The civil society, including PSPD, will keep a close eye on the procedure of the assembly for the bill to be passed wholly, and react to it.