<The report form Lee Tae-ho, secretary-general at the PSPD>

This month of the PSPD, Dreams we are making together.

It’s been a month since the Sewol ferry accident happened.

By the time you receive the magazine ‘Participatory Society’, it would be more than 40 days. Still remaining families of missing passengers are waiting at Paengmok port staring at the ocean of bitter grief. I have visited Paegmok port on 15 May with a representative Lee Seok-tae, a chief policy adviser Lim Jong-dae and Park Rae-gun a president of Human Rights Center ‘People’. The port became quiet after the attention of the press diminished. I have folded a few yellow paper ships and attached at the port mole.

Different from what was seen in the news, Jindo gymnasium where grieving families are staying is located in 20 minute-drive from Paengmok port. It’s even more than an hour by ship from there to the accident scene. It makes me feel deep sorrow to think of students and families who are travelling that distance back and forth everyday with heavy hearts.

I had a chance to talk to a monk who went out to the scene by barge ship during the rescue process. When I asked him “Which tools have divers used?”, he said “Steel pole resembled crowbar”. I guess a word ‘speechless’ can only describe the situation.


The Sewol Ferry disaster is revealing a bare face of Korea.

All Koreans are the witness to the disaster and for remaining families. We have watched rescue team using steel poles to save people. This is what is happening in a nation which annually spends 34 trillion won for the national security. Chengwadae has shown its great ability to control the people and the press but denied that it is not the control tower responsible for disasters. We have seen the President Park Geun-hye and steering groups of Korea do nothing but blaming the people.

Park Seung-chun, a Minister for Patriots and Veterans Affairs denounced the people who criticized the government by saying “When a state falls in a crisis and experiences difficult period, Americans unite together.” Then, we would like to ask him back if our government bodies have acted in one during the rescue process. Has the Coast Guard entered into the sinking ship and saved a single person? Why the government has failed to save children who stayed together in the ship?

A son of a Chaebol family Jeong Mong-jun wrote on SNS that “The nation is uncivilized because the people are”. He is just a high school student who could make that comment. The problem is he is not the only one. A captain and steering crew of Korea emphasize “The people are the country” only when to force the people to keep silence. Cho Gwang-jak, a former vice president of the Christian Council of Korea stepped down from his position because he even said “Poor students were supposed to go on an excursion to the Bulguk Temple. The accident happened because they chose Jeju Island and took a ferry.” How many Koreans would agree that airfare to Jeju Island is cheap? Furthermore, is airplane safe at all?

There is one truth we have to admit from these abusive comments.

The lives of most people in this broken country are retrograding and the government and the privileged do not care about the lives and safety of the poor. Do you think it is an oversensitive remark? What so ever, no one can argue that underlying and nature problems are not correctly recognized.

Followings are good examples. A global corporation Samsung hides industrial accidents and another international company Hyundai Motors ignores a court decision to convert irregular workers to regular. The reason would be because post-accident compensation and temporary measures are less costly than prevention and fixing causes.

The most assuring evidence showing that the government is not interested in resolving fundamental problems is the televised speech of Park Geun-hye on 19 May. She apologized for failed rescue and salvage of Sewol Ferry disaster and even dropped her tears. However, there was no word about the responsibilities of the president and what Chengwadae has failed to do as a control tower. Instead, the list of faults made by the Coast Guard and the Ministry of Security and Public Administration were addressed. While saying to prevent reoccurrences, she said to continue deregulations including economic renovation plan on the other hand. Don’t they know that the disaster incurred from deregulations such as extending expiry date of old ships? The statement contained various prevention measures including dismantle of the Coast Guard and strengthening ethics of public officers but it did not mention democratic tools such as protection of whistle blowers for public interests and securing the right to the press and expression which facilitate citizens to control state power.

After the speech, the president went abroad to participate in ground-breaking ceremony of a nuclear plant which a Korean company receive an order. Concerning changes of a few secretaries to the president and ministers, she dismissed assistants who had the military background, kept ones from political prosecutors and appointed new ministers from prosecutors’ office. Above all, a chief secretary Kim Ki-choon who has received criticism from all levels remained in. Even though the President said the final responsibility was on her, it looked like the same attitude of an old emperor who used to say “It’s because of lack of my virtue”.

The biggest matter lies in temporary measures. Meanwhile, victims’ families have set up ‘People’s Independent Organization for investigating the truth’ and started collecting signatures insisting to prepare prevention measures together with grieving family members, the president who are responsible for the failed rescue ignored that demand and arbitrarily examined causes, punished the responsible and presented measures. In despite the president agreed to legislate the Special Act at the end of the statement, contents itself refuses people’s participation in investigation and finding the truth.

If the government’s intention to quickly close the case becomes real, it would not be possible to prevent another Sewol ferry disaster. We could be a next victim. One of the remaining family member said “The reason I ask for a prevention measure is not for me. I have already lost a family so that it does not matter to me anymore. Trying to prevent it from happening again is for the future of your families”

We can’t live the same way before the Sewol Ferry accident.

A captain and steering crew of Korean Ship which already has sunken half are not very accountable. Therefore, the people have to move. We all are witnesses, attesters and the concerned party. The obligation of witness is not to forget. Attester should speak up what he or she sees, hears and believes without being shaken by any temptations. The role of the concerned party is to move to resolve the problem. The world does not get better automatically.

On 15 May, remaining family members have announced a statement demanding “All possible actions should be taken to rescue and find all the missing so that they can come back to their families.” It also addressed that sincere self-reflections of all the responsible would be the start to rebuild the trust on the nation and belief on the society, and heal wounds. The completion would be finding and revealing the truth”.

The family members are now asking the people to join for a petition of 10 million signatures urging <To find the truth of Sewol Ferry disaster / Enactment of the Special Act to punish the responsible and make the nation safe>. The petition opposes one-way process of investigation and preparing measures executed by the government or/and the National Assembly which already lost a trust from the people. It demands to set up an independent and pan-national investigation committee in which the families and ordinary citizens participate.

Activists of the PSPD go out to the street to collect 10 million signatures as requested by grieving families. PSPD members would have received emails and text messages asking to join in. If it is not too much trouble, it could be a big help for them to sign or collect signatures on a downloaded signature paper and send it to the PSPD. The Peoples’ Council for the Sewol Ferry Disaster are holding candle rallies on weekends since 17 May urging for remembering victims, shift rescue, thorough investigation and calling to accounts.

Particularly, PSPD is taking care of ‘People’s Participatory Committee for finding the truth of the Sewol Ferry Disaster’ under the Peoples’ Council, and Lee Seok-tae, co-representative and a professor Ahn Byung-wook (Former chairman of the Truth and Reconciliation Commission of Korea) are chairing the committee. With the involvement of grieving family members and citizens, the committee is planning to collect data, research, and prepare and suggest various measures in order to facilitate the process of finding the truth to be independent and a fundamental investigation.


So far, it was from Lee Tae-ho, secretary-general.

Can Northeast Asia ever be free from nuclear weapons? 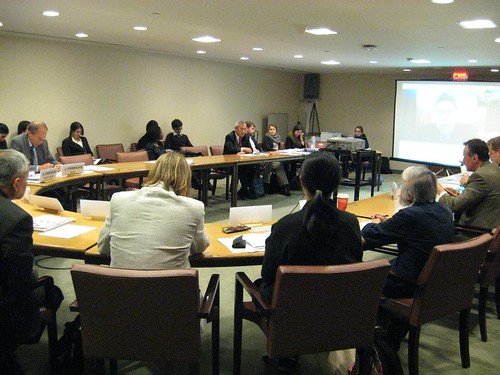 Too difficult or impossible! This is what UN representatives of six-party talks think about ‘Establishing a Northeast Asia nuclear weapon free zone’. As far as Northeast Asia has a nuclear-have, couldn’t it be possible to eliminate nuclear weapons in the region until nuclear disappears from this world? Is it truly an unavailing hope of naive citizens?

Regardless of what they think, there are people who are raising their voices that it is possible. Civil and social organizations from Korea, Japan, and Mongolia including PSPD gathered in the UN headquarters on 30 April and discussed how to make it happen. That was a NGO forum ‘Time for Action to Establish a Northeast Asia Nuclear Weapon Free Zone’ at the 2014 NPT preparatory committee.

In line with discussions, PSPD has insisted in the forum that it is necessary to overcome an inertial perception and prejudice against North Korea to resolve repeated nuclear crisis. It also proposed to change the policy ‘Strategic tolerance’ of Korea-US government focused on sanctions, and resume talks and negotiations for the purpose of establishing a Northeast Asia nuclear weapon free zone. Japanese civil society also agreed that it would do good for the security of the region and introduced their nuclear free zone activities of various levels from a grass roots movement within the country.

At the end of the forum, a joint statement was presented based on opinions and recommendations made by civil societies for realizing a nuclear weapon free Northeast Asia. It emphasized that it is time to take actions. States should primarily pursue getting out of security policies which rely on nuclear weapons. Especially, it stated that chronic nuclear issues of North Korea require comprehensive approach converting from armistice agreement to Korean peninsula peace system, and urged co-operations and supports from all fields.

As delegations of six-party talks think, establishing a Northeast Asia nuclear weapon free zone can be extremely difficult or even impossible. However, how hard and complicated negotiations would be, it can’t stop efforts for the establishment. PSPD will continue and strengthen its activities for a nuclear free Northeast Asia until 2015 NPT review conference.

NPT(Nuclear Non - Proliferation Treaty) is the world biggest treaty in which almost every single nations joined except North Korea, Israel, India and Pakistan. Signatories sit together every five years to review if promises are abided for the purpose of disarmament and removal of nuclear weapons. 2014 NPT preparatory committee was the intermediate check before 2015 NPT Review Conference if agreements made in 2010 have been fulfilled by each signatory. During the committee, NGO forums on various themes are held by anti-nuclear peace organizations on disarmament and non-proliferation. PSPD participated in ‘Nuclear-free Northeast Asia NGO Forum’