It is April which is in the interim of March, the president Park was impeached for monopolizing national administration and May, and a new president will be elected. We should keep the fever and the flow of candle light civil revolution started last October to make a good nation and a society. 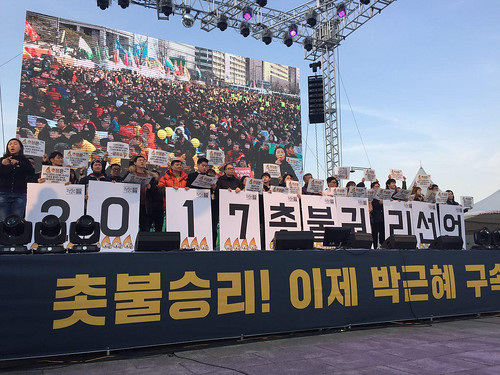 Impeaching a president does not simply make a nation and a society brand new. Civil forums were held throughout the nation both in small and large scale to discuss how to build a new society while candle rallies filled the streets in January and February protesting against Park Geunhye-Choi Sunsil gate and demanding the resignation of the president. Holding a general discussion of citizens is another activity that PSPD has put efforts on besides carrying out successful candle rallies as a major participating organization for ‘Emergency People Action for Park Administration to step down’.

<2017 Korea, be prosperous> a general civil forum was held at Changchung gymnasium on 18 February and more than 1,500 citizens participated to talk about declaration of rights of candle light. As a working organization, PSPD has organized opinions of citizens and developed them into a declaration till early March in cooperation with other civil organizations and voluntary activists. <Declaration of Rights of Candle light> was announced on 11 March, the next day President Park was impeached after having a Scheme Committee composed of 50 members recommended by each group of the forum confirmed the draft, and main contents were as follow. △ Candle rally is an action of sovereign to reform representative democracy and advance direct democracy △ Candle rally is a direct action of sovereign that does not tolerate abuse of public power for a previliged group △ Candle rally is a legitimate protest against all kinds of discrimination and inequality which bear corruptions and privileged power △ Candle rally is a judgment for the power which oppress conscience and freedom to expression, and control the press, and for the press who cooperate. Full text of the declaration can be found in website of PSPD. 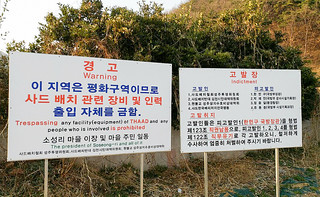 Process of adopting Anti-ballistic missile system THAAD (Terminal High Altitude Area Defense) is forcibly pushed forward for the US army residing in Korea to use. The US seems to think that a new government elected by upcoming presidential election would take different policy from Park Geun-hye administration. By bringing THAAD equipment in Korea without a notice, they asked for criticism of attempting holdout. Hence, peace buses headed to Seongju in Kyungbuk province on 18 March from all around the nation. More than 5,000 citizens gathered in to commence <Taking Peace Steps for total withdrawal of THAAD deployment plan>. PSPD joined in as a leading organization for ‘National Action for No THAAD deployment in Korea’.

Policy proposal and Voter’s campaign for ‘Refresh Korea’
A presidential election is just a process of selecting a person who will accomplish jobs of a president. It is a chance to collect desires of citizens for a new nation and a government, and reflect them in national policies and assignments. PSPD has worked hard to make a better society and it is trying to take upcoming presidential election as an opportunity to realize it.

Therefore, PSPD has released <Can you call it a nation? PSPD’s policy suggestions for the 19th Presidential Election> on 27 March for voters and presidential candidates to hear. There are three core agenda which all candidates are hoped to adopt; reform of election law which does not reflect people’s opinions, reform of prosecutors who obey the Blue House and reign over the people, and income security to support basic livelihood.

PSPD is doing its best to check and analyze major election promises of presidential candidates from each party. In cooperation with Hankook daily, it will inquiry and exam promises whether they look rosy only on surface and if implementation plan is clear. Inquiry letters asking stances and promises on important sectors have been sent to candidates since 23 March and answers are being received and analyzed. 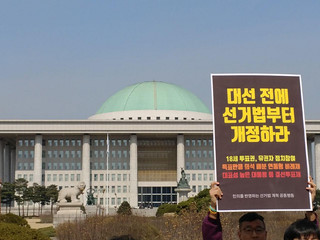 PSPD held ‘Declaration of the People for the National Election Law reform’ on 15 March in front of Sejong Cultural Center front stairs and argued that the first agenda after impeachment of the president is to reform the Election Law. Participants requested to secure voters age to 18 years and older, and improve the law because it currently controls and punishes expressions and actions of voters which may influence the election for maximum 180 days prior to a vote. In order to increase representation and reflect voter’s choice and voices, it asked to adopt mixed member proportional representation to allocate seats by votes on a party, and runoff voting for presidential election. After declaration was announced, more than 100 participants marched to Bosin Bell in Jongno.

On 22 March, ‘Simultaneous National Action Day demanding reform of the National Election Law’ was held. In Seoul, one person demonstration was carried out in front of each party office; the Minju, People’s Party, Bareun Party and Liberty Korea and candidates including Moon Jae-in, Ahn Hee-jeong, Lee Jae-myung, Ahn Cheol-su, Yoo Seung-min and Nam Kyung-pil. Civil and Social organisations have taken their parts in that press conference and one-person demonstration took place urging the reform of the law at more than 30 locations.

Published comprehensive report on prosecutors during four years of Park Geun-hye government
PSPD has published a report on prosecutors of Park Geun-hye government every year and ‘Deprived justice, sunken prosecutors’ a comprehensive report for four years of her administration has released in the last week of March. The title of the first year report was ‘Prosecutors, failed to reborn as prosecutors for the people’ and the second one was named ‘Political Prosecutors, falling deeper into swamp of abnormality’. The third one was called ‘Prosecutors, serve the power and reign over the people.

For the purpose of reforming prosecutors, it is necessary to record faults and status, and let them remembered. Thus, PSPD published <Report on prosecutors during five years of Kim Dae-jung government at the end of his administration. No report was made for Noh Moo-hyun since reform didn’t seem quite necessary. However, publishing reports resumed in Lee Myung-bak government.

PSPD has fully recorded how prosecutors haven’t hidden their true face as political prosecutors serving the blue house during four years of Park Geun-hye government. How they have abused and misused their powers but negligent to investigate current powers are precisely written. Expenses to print and distribute reports were covered by online contribution of citizens. Prosecutor reort is available on website of PSPD.

Court confirms to support a request to disclose security education movie which has shocked primary school students
On 9 March, the Supreme Court upheld PSPD’s demand to withdraw a decision of the Defense Ministry to reject to disclose patriot education movie. The ground of the lawsuit happened in 2014 when the Defense Ministry executed security education for primary school students under the name of ‘patriot education’. The movie made for this had to stop playing because students fell in shock while watching it.

According to authorities, the movie seemed to be made to implant unconditional patriotism and hostility to North Korea. The Ministry seemed to fear for criticism that refused to disclose the movie. Therefore, PSPD has submitted a formal request for information disclosure in order to check contents and the truth of the security education. The Ministry has refused it so that PSPD has filed a lawsuit in August 2015 against the Ministry’s decision not to disclose. At the first and the second trial, court said decision of not to disclose violated the law. In one year and seven months from the start of a legal action, the Supreme Court confirms to support PSPD.

The Defense Ministry argued that opening the education movie would damage national security since the movie tried to raise hostility to North Korea. However, the Court accepted PSPD’s argument that it is vague to judge damages and interests on the national security when movie is disclosed while social review and discussion regarding security education status seemed necessary for public interest. The next action will be taken upon recipe of the movie from the Ministry. Taking this opportunity, it is required to improve ingrained and irrational decision of not to disclose information of the Defense Ministry.