People Power 2017, This Month of PSPD

It’s been three months since Moon administration started its sailing. PSPD is making every effort to propose good policies and promote reforms in order for the new government to respond to wishes of candle citizens. At the same time, it would not hesitate to fight against powers which interfere with reforms of the government or the National Assembly.

It is the 30th Anniversary of June Democracy Movement this year. Together with 5.18 Gwangju Democratization Movement, they provided a foundation to start democracy in Korea. Taking this opportunity, we would like to express sincere respect and gratitude for who have been sacrificed or had tribulation while fighting for the democracy in Korea, human rights and livelihood of the people. 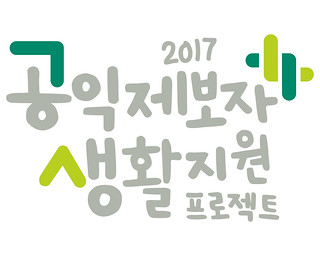 Whistle blowers have contributed to reveal the truth but many of them get fired or discriminated afterwards. Succeeding from last year, PSPD carries out ’2017 project to support whistle blowers’ for who suffer from financial and psychological difficulties. Living expenses of two million won for six months to the maximum is paid to who lost income by dismissal or discharge and legal and psychological help are provided if required. It is a support program of the Beautiful Foundation, and Minbyun, Civil Society Organizations Network in Korea, Human Rights Medical Institute and PSPD cooperate to implement. PSPD will keep trying to do its best to build a society where whistle blowers are protected. 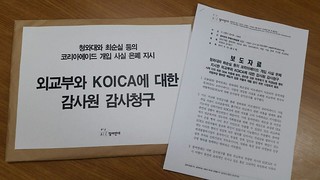 PSPD has requested public interest audit for the MOFA and Korea International Cooperation Agency (KOICA) on 19 April in respect to concealing and deleting Korea AID project (ODA projects in Africa) documents and records. On 16 June, PSPD received a letter from the Board of Audit and Inspection of Korea that the audit has begun. Despite of having responsibility to prevent internal corruption and control wrongdoing, the MOFA kept silence and let people’s tax to be abused to pursue personal interest through ODA project. Furthermore, the MOFA ordered KOICA to delete related documents and data, and even conceal them despite of involvement of the Blue House and Mir Foundation in Korea Aid project was revealed during National Assembly Audit last September. Monopolizing national administration committed by Park Geun-hye and Choi Sun-sil has been found in various fields but not all revealed yet. Through this audit, all corruption has to be found concerning Korea Aid and responsibility must be asked to public servants for illegal and unjust acts so that the same thing does not happen in the future.

People encircled the US Embassy demanding to withdraw THAAD deployment 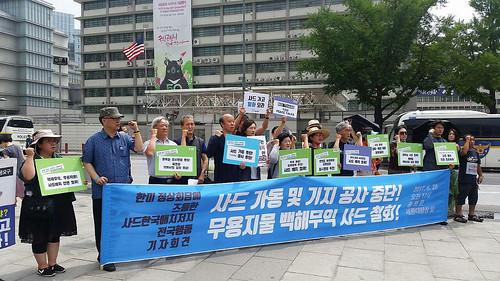 THAAD deployment threats the peace of Korean peninsula and increases tension in Northeast Asia so that people keep protesting to stop THAAD deployment which will be used by US in Korea. There has been constant struggle of residents in Kimcheon and Seongju of Gyeongbuk province and protest of religious field including Won Buddhism is getting stronger. That is because THAAD has no benefits but harms. It worsens the relationship not only with North Korea but also with China. It also increases financial burden and destroys regional community.
Therefore, people gathered in Seoul Square on 24 June and shouted out ‘Go away THAAD, Come Peace’. ‘National Action to Stop THAAD deployment in Korea’ filed an injunction and Seoul Administration Court allowed the demonstration to encircle US Embassy on 23 June for the very first time in history. Hence, participants peacefully surrounded the US Embassy making human belt and delivered a message to US ‘Don’t force THAAD deployment’. PSPD will actively continue with actions to stop THAAD, improve South-North Korean relationship and achieve peace in Korean peninsula in cooperation with people who love peace.

Problems with Special employment labor must be settled 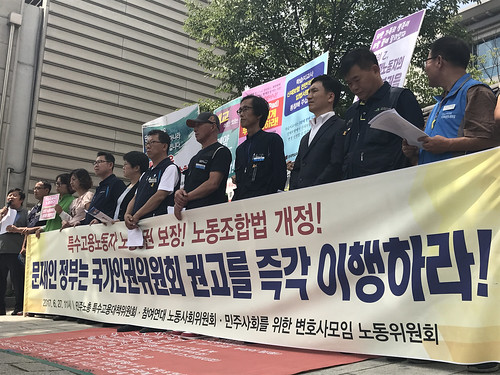 Have you ever heard a word ‘Special employment labor‘? How is it different from regular workers? The fundamental problem is that they are forced to gain an owner or self-employer status that they are not entitled to exercise three basic labor rights. For instance, cargo drivers, construction heavy machine workers, parcel deliveryman, workbook teachers, after-school teachers, insurance salesman, golf caddie, broadcast writers, work-at-home postman, they are all categorized as special employment labor and exist in various industries and jobs. Although their works are same as ordinary workers, they are not recognized as they are and not protected by labor laws such as Basic Labor Standard and Trade Union and Labor Relations Adjustment Act.

Labor Society Committee of PSPD, Special Employment Labor Council of Korea Confederation of Trade Union and Minbyun held a press conference on 27 June requesting to secure three basic labor rights for special employment labor, and submitted a letter of opinion to National Administration Planning Advisory Committee urging to include this matter in national reform tasks of the new government.

Urge to dispose privatizing railways and integrate Railway Service and Rail Network Authority
Moon government has established ‘National Administration Planning Advisory Committee’ and started to select tasks to fulfill election promises. ‘Civil society for Making Railways for Public Interest’ which is consisted of 213 civil and social organizations including Citizens' Coalition for Economic Justice, PSPD and YMCA presented a statement on 20 June demanding to adopt policy that enhances public interest and safety of railway service, and delivered a letter of opinion to the National Administration Planning Advisory Committee.

President Moon agreed to integrate Korea Railway Service and Korea Rail Network Authority at policy response session on 14 April and gave reasons as follow.  ① There is no synergy in terms of railway rental fee, station area development but creates conflicts between authorities. ② Separating facility management and maintenance increases accidents threatening railway safety ③ Integration is unavoidable in terms of national competitiveness ④ Technology is much behind advanced states and integration can be a breakthrough. They are all what Civil Society for Making Railways for Public Interest has been insisting.

The Civil Society will actively urge and work together for Moon government to include the integration in national tasks and execute it at the early stage of his term in order to strengthen public interest and international competitiveness of Korea Railway.