Dear Members,
My heart feels very heavy to send 2014 away and greet 2015 because I promised a year ago in the magazine ‘Participatory society’ to make the year 2014 a victory of the truth, justice and the people. I would like to convey New Year greetings with a poem which seems representing the current situation. 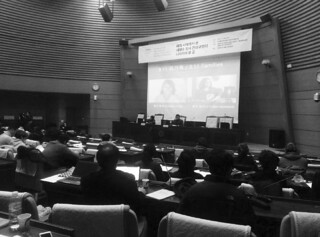 ● Sewol Ferry
▶ A Special investigation committee for 4.16 Sewol Ferry Disaster is being consisted accordingly to a legislation of Special Act. Lee Seo-tae, co-representative of PSPD is participating as a chairperson of Sewol family’s recommendation. Kim Jin, a lawyer and a member of the Committee for Fair Labor Society also joins in by the opposition party. However, most of five members proposed by the Saenuri Party seem unqualified so that Sewol families and civil and social organizations are organizing protesting press conferences and one person demonstration demanding for withdrawal of its recommendation.
▶ PSPD has taken a legal action on 3 December against the Blue house’s refusal for a request of information disclosure regarding what had been reported to the President when Sewol Ferry sank.
▶ On 9 December, PSPD has organized “International Workshop- Tasks of finding the truth for Sewol Ferry Disaster from aspects of overseas cases” in collaboration with the People’s council for the Sewol Ferry Disaster and The Council of bereaved families. The workshop has invited experts and families of disasters happened in overseas including Kowata Masmi, a victim of Fukushima disaster, Danaka Mizhiko, a member of the Investigation Committee on the Accident at the Fukushima Nuclear Power Station and Philip Shenon, a former reporter of New York Times and an author of [Commission : What we didn’t know about the 9/11]
▶ PSPD has spent a Christmas and a New Year with Sewol families at Ansan and Gwanghwamun.

● Macadamia nut rage, power abuse of the powerful
▶ PSPD has reported Cho Hyun-ah, a former vice president of Korean Air for a violation of the Aviation Act on 10 December regarding an incident ‘Macadamia nut return’

● Dissolution decision over United Progressive Party
▶ The PSPD strongly denounced the decision of the Constitutional Court on 19 December to dissolve the United Progressive Party (UPP) and criticized that the one denied principle order of the democracy were the Constitutional Court and the government not UPP. Even though the Court assumed that “A political party is an important constitutional organization so that it can’t be dismissed unless physical and real threats to principle order of the democracy are proved”, it still decided dissolution without proving actual and specific behaviors. On the other hand, the Supreme Court judged that Lee Seok-ki was innocent for the charge of conspiracy of a rebellion.

▶ PSPD has organized an ‘Urgent discussion on forced dissolution of UPP’ on 22 December and criticized the decision of the Constitutional Court. In addition, it is preparing a legal statement.

● Punishing Minbyun (Lawyers for Democratic Society)
▶ Concerning the matter that prosecutors’ asked Korean Bar Association to punish lawyers of Minbyun, PSPD has sent a written request to the Association on 3 December asking to refuse that demand together with 4.530 people signed in the Internet and 13 civil and social organizations. In the request, PSPD argued that prosecutors’ has asked unfair punishment for lawyers who have been very responsible for what they had to do. Furthermore, it insisted that the Association must decline such request as a representative of lawyers and whose mission is to protect human rights,

● Revision of the Public Service Ethics Act
▶ The revision of the Public Service Ethics Act passed a plenary session of the National Assembly on 9 December which intended to resolve ‘Gwanfia (Government Maffia)’ problems. It reinforces restrictions on employment of public servants, officers and executives of public organizations to a former position related jobs after retirement. Since PSPD has requested a similar legislation on 20 June, it welcomes a revision but the matter of establishing a professional and independent organization to handle ethics of public servants remains unsolved.

● Irrational Dispatch Act
▶ PSPD has submitted the second written petition to the National Assembly on 4 December opposing <Participation Act for Dispatch of Korean Army to overseas> which passed the National Defense Committee of the National Assembly on 1 December. According to this bill, it becomes legal to send not only Korean Army for multinational troops such as Iraq dispatch but also so called ‘Education training’ for the purpose of exporting nuclear power plant like a dispatch to Arab Emirates. PSPD has been pointing out that the bill would violate the Constitution and has probable dangers. It is pending at the Legislation and Judiciary Committee at the moment.