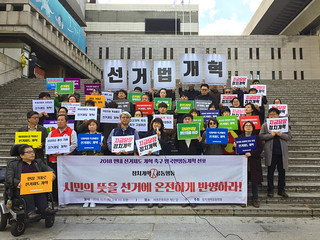 So many problems in our society incur from politics so that they can be solved by politics. In order to focus on political reform, PSPD has volunteered to be a secretariat for <Political Reform Joint Action>, solidarity of civil society and organizations working for the political reform and it is also preparing for movements independently. Firstly, <Political Reform Joint Action> held a joint press conference on 2 October in cooperation with other political parties to urge to appoint of members for a political reform special committee, adopt proportional representation system and decide to reform the election system within this year.

The Political Reform Special Committee was formed on 17 October and it has to propose election system reform plan by next April in order to apply it to the 21st General Election. Hence, <Political Reform Joint Action> has begun various activities for the committee to have proper discussions and fully reflect people's opinions. One-person demonstration is being relayed in front of the National Assembly and 'Thursday Political Reform Action' is being held every Thursday from 17 October till the end of the year. Meetings of the committee will be monitored and their process and results will be shared with citizens. With regional governors, politicians and citizens who join in the political reform movement, 'Very Political Night' was held on the last day of October and it was consisted of a talk show and various cultural performances. 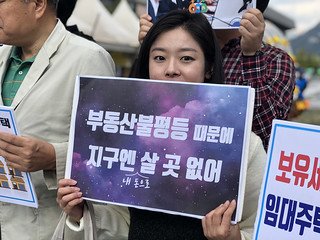 Real estate speculators trying to make unearned income have made a lot of ordinary people suffered who do not own a house. Recently, the government introduced 913 real estate measure but pretended to enhance property holding tax. Enhancing the tax does not solve all but real estate problems can’t be settled down without it. The best way to claw back unearned income made from properties is to drop down expected earnings ratio and increasing property tax is the strongest method to do so.

<Citizen's Action for enhancing property holding tax> was established on 10 October by civil and social organizations which agree on rooting out destructive real estate speculation, improve property inequality and strong enhancement of property holding tax. It is going to collect signatures from academic, religious and civil society field until 1 November and submit a request of meeting with the president and Director General for Social and Welfare policy in order to urge the government to enhance. In respect to this, a series of column 'Why property holding tax?' is being posted since 22 October in collaboration with <Oh My News>. 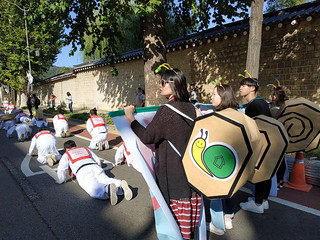 Having the 2018 World Habitat Day, young people, students, people from religious field, the handicapped and habitat civil organizations have gathered in Gwanghwamun square on 3 October and held a press conference demanding to secure the right to housing. They shouted out 'Listen to the voice of tenants', 'Want to live in a house', 'House is the human right' and carried out 'Snail march of houseless people' which was a combination of full body prostration and snail performance. Another performance, dismantling housing inequality tower was demonstrated in front of the Blue House and a letter of requests for securing the right to housing was handed in to the Blue House as follow △ Adopt ceiling of rent or lease fee and contract renewal request system △ Expand long-term lease public houses △ Enhance property holding tax.

On the other hand, Center for People’s Livelihood Improvement and Academy Neutinamu jointly began a series of lectures <Wonderful housing stories useful to know>. The first lecture 'House is the human right' was held on 17 October followed by the 2nd on 24 October ‘From writing a lease contract to requesting repair cost’ and they talked about future dwelling, difficulties of living as a tenant and how to wisely solve facing problems. 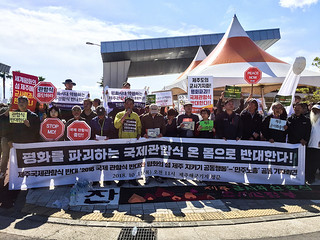 A slogan 'Sea of Jeju embraces world peace' is a hypocritical lie that it shows off nuclear military force at Jeju Naval Base while speaks about the peace and denuclearization of Korean peninsula at inter-Korean summit. To stand against this, 'Opposing 2018 Navy International Fleet Review and Joint Action to protect Jeju, a peaceful island' held a press conference in cooperation with Korean Confederation of Trade Unions and expressed opposing stance insisting that International Fleet Review makes Jeju a arms race ground of Northeast Asia.

Pains of Rohingya hasn't ended yet

It has been more than a year since Rohingya massacre happened producing a lot of refugees but there is no sign of settlement. Finding the truth has stopped at the half way because of refusal of Myanmar government and more than 90 thousands refugees are holding on day by day at very poor camps in Bangladesh. Hence, Center for International Solidarity of PSPD has invited Maung Zarni, coordinator of Free Rohingya Coalition on 22 October which has been studying persecution and massacre on Rohingya, a Myanmar Burmenese for a long time and organized a venue to listen to background and solutions for Rohingya crisis. 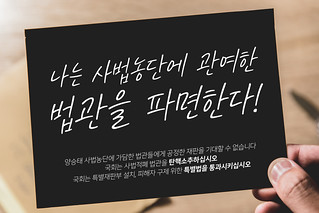 Courts have been interrupting and delaying investigation on trading trials and monopoly of Yang Seung Tae judiciary. Nevertheless, as like burying head in the sand, the truth gets revealed one after another and an arrest warrant was requested for Yim Jong-heon, a former court administration officer. Center for Judiciary Watch has formed <Declaring emergency status for Yang Seung-tae judiciary’s monopoly> and working for strict investigation, impeaching judges and reviving victims. 'National movement for rooting out judiciary monopoly' has been held every second week since September. On 20 October, the 3rd assembly was held at Cheonggye square and more than three thousands citizens shouted out and demanded 'Arrest and Punish Yang Seung Tae! Impeach corrupted judges! Set up Special Court! Revive victims!'

On the other hand, Center for Judiciary Watch is collecting signatures online for the purpose of requesting impeachment and dismissal of judges involved in judiciary monopoly. Furthermore, a special act has to be legislated to establish special court and accordingly revive victims. Collecting signature will be carried out till early November and submitted to the National Assembly. 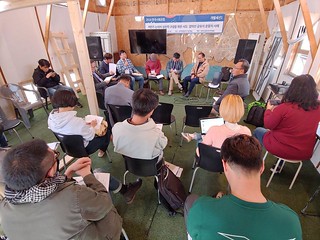 There has been growing demand on a forum in which citizens from all difference fields can participate to discuss direction of reforming Korean society after the candle revolution so that <Korea Society Forum> which has stopped for the last seven years was resumed on 12-13 October. Center for Legislative Watch participated in a workshop ‘Public movement for political reform’ and the PSPD Youth Council hosted a discussion on Basic Youth Act.

Institute for a Participatory Society presented interim report on democratic decision making system. This forum was not satisfactory but the next one is expected to see more social activists to talk to each other and work together next year.

Center for Peace and Disarmament and 50 peace activists in Korea organized '2018 Peace Activists Convention' at Baekryung Island on 17-19 October having a slogan 'No NLL for seals'. Baekryung Island is a scene of separation where engagement occurred till recent but at the same time a habitat of spotted seals. The convention has sought the future of changing Korean peninsula and peace movement at the land of separation and life.

Who owns DAS? The answer is MB 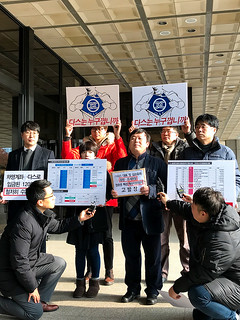 Seoul Central Court gave Lee Myung-bak a sentence of 15 years in jail, fine of 13 billion won and additional 8.2 billion won on 5 October. The decision was made in 10 months since Center for Economic and Financial Justice reported true DAS owner to the prosecutors for embezzlement, breach of trust and tax evasion last December. The allegation 'Who owns DAS?' hasn't been clarified for more than 10 years since 2007 Presidential election. By this sentence, the court confirms that a former president Lee Myung-bak is a real owner of DAS. However, 15 years imprisonment is very light considering the fact that he was elected to a president by lying and accepting bribes is a serious crime. PSPD presented its stance on the sentencing day and urged the court to make strict judgement for Lee at the second trial who keeps lying, giving excuses and denying crimes. 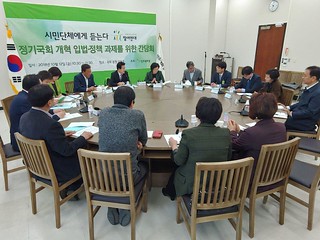 National Inspection was carried out in October at the National Assembly. Each center of PSPD has monitored inspections and carried out additional responses. Center for Administration Watch requested an inspection on status of employment prohibition of retired public servants to lawmakers of Administration and Security Committee. Committe for Social Welfare announced a joint statement 'the measure is required for corrupted nurseries and kindergartens' which was exposed by a lawmaker Park Yong-jin and made the people furious, and requested to secure transparent management of childcare facilities.

On 15 October, Center for Economy and Finance Justice urged the Fair Trade Commission to response actively on governance of Hyundai Heavy Industry which was confirmed by National Policy Committee for the purpose of Chaebol reform. Center for International Solidarity released comment in respect to allegation raised by a lawmaker Kim Kyung-hyup of Planning and Finance Committee that the cause of dam collapse in Xe pian- Xe Namnoy, Laos is due to excessive change of design and shortening construction duration so that it is necessary to find the truth.

In preparation of legislating National Assembly in November, PSPD has started writing a series <Slow News> from October on must-be enacted bills. In addition, through meetings with Hong Young-pyo, a floor leader of the Minju and Jeong Dong-young, a president of Democratic and Peace Party and other channels, reform bills have been submitted to lawmakers and activities to urge passing those bills are being carried out.

PSPD will do the best to see fruitful results of essential legislation for the reform and people's livelihood which have been demanded for a long time such as setting up a special investigation agency for high ranking public officers, national intelligence service reform, gross real estate tax, special Act for judiciary monopoly, Public Officials Election Act, Insurance Act and Housing Lease Protection Act .