In July 2018, as the Ministry of Health and Welfare adopted “Principles on Institutional Investor’s Fiduciary Duties”(Stewardship Code), it announced that by 2020 all preparation for active stockholder’s rights would be ready. However, the ministry has been maintaining a passive attitude toward the backlashes against the code from the business sector. The National Pension hasn’t responded even though HYOSUNG, DAELIM, and other groups have engaged in continuous embezzlement and breach of trust. On the contrary, it has been making worrisome decisions like transferring the voting rights to consigned operators that are not free from the influences of the major companies.

With regard to this, the Center for Economic and Financial Justice has openly inquired about the Ministry of Health and Welfare, and the National Pension Service’s performance, preparations, and future plans for carrying out stockholder’s activities according to the stewardship. The center has also urged the institutions to ask for reforms related to problematic companies, to exercise the veto to problematic director candidate’s serve of consecutive terms, to recommend independent outside director candidates, and to proactively confront the voting rights’ commission.

The pension funds of the U.S. that stand at the forefront of capitalism are actively implementing stewardship codes. While the business sector is resisting by pointing to this as “pension socialism,” this is ill-naturedness that wants investment but no interference. The voting rights of National Pension are protected by the Commercial Law. In operating the pension, which consists of people’s retirement savings, the business sector should not be the only influential parties among those involved.

Since there is not enough time to prepare until the regular meeting of shareholders (March of this year) PSPD will also do our best for the Ministry of Health and Welfare and National Pension Service to focus on the establishment and implementation of the stewardship code.

Is controversy against “immense” Comprehensive Real Estate Holding Tax reasonably backed? According to the analysis of 24,450 houses that exceed the price of 900 million won per household, the total real estate tax in 2019 increased by 820,000 won from the previous year. The average real estate tax for this year increased by 210,000 won.

While 60% of those objected to this tax is within the section where the tax ratio hasn’t increased through the amendment process of the tax law, the increased tax from these houses is only an average of 250,000 won. Comparing this to how much house prices have increased over a single year, this is absurdly low.

Even though the comprehensive real estate tax code have been strengthened in 2018, the tax burden is too low to suppress speculative demands for real estate. The Center for Tax Reform will continue to act to prevent real estate speculations and just taxation to unearned income. 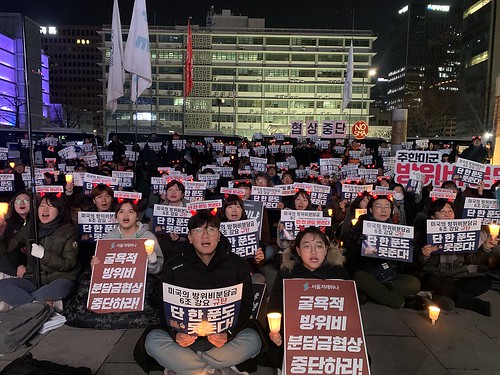 Negotiations on the 11th Special Measures Agreement (SMA) are underway to determine the share of US Forces in Korea in 2020. As reported, the U.S. has demanded ROK pay $5 billion (6 trillion Korean won), which is six times the amount in 2019 (1.04 trillion won). According to the Status of Forces Agreement between ROK and the U.S., the US is responsible for stationary fees, while ROK is to only supply facilities and land. Going further, the U.S. is demanding the spectrum beyond what SMA framework covers: labor costs, logistics costs, and construction costs.

It has been reported that Washington is asking Seoul to cover U.S. costs for personnel and their families, joint training sessions, equipment operations like THAAD, rotation of deployment, and exercises outside of ROK but related to the defense of the Korean peninsula. This is to pass on the costs of carrying out the global hegemonic strategy, including the costs of the India-Pacific strategy, to Korea. It is a threat to peace in East Asia beyond the Korean Peninsula.

The PSPD Center for peace and disarmament held a panel discussion at the National Assembly last November exploring the fundamental problems of the SMA and ways to deal with the 11th Agreement. In December, civil society organizations including PSPD held two candlelight movements at Gwanghwamun square to denounce the U.S. for imposing unfounded defense costs for the U.S. military presence in Korea. 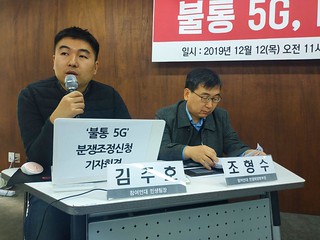 While 5G telecommunication services have been commercialized, the 5G is constantly interrupted. The service started with 60,000 base stations, which is only 7% of LTE. Something that comes as a bigger surprise is the fact that the three telecommunication companies and the Ministry of Science and ICT approved the 5G network despite its anticipated incompleteness. The PSPD Center for People’s Livelihood Improvement, along with seven civilians who have been poor service despite high bills, filed a dispute to the Korea National Council of Consumer Organization to discount or prorate bills until normalized services are made available, and to allow the change of bill plans without penalty charges.

The seven users who participated in the dispute settlement have also complained about the poor customer service from the carriers, receiving answers such as, “we can’t do anything, we’re opening a base station, please wait” and “Use LTE priority mode”. In addition, the government agency said, “Did you sign the contract with the carrier that said there could be a communication failure?”

The three big telecommunication service providers should actively participate in the mediation process, and enact practical measures like marking down the bills 10,000 - 20,00 won to the level of LTE until the 5G service stabilizes, or exempt penalty fees for cancellation of current plans. Adding on to this, the Ministry of Science and ICT who is responsible for management and oversight should act responsibly for the mediation to go well. The Center for People’s Livelihood Improvement will stay with the topic until enough measures are put into place. 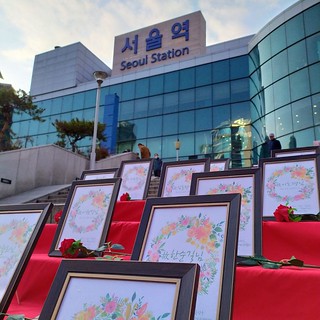 Civil society groups have held a homeless tribute every year since 2001. The Social Welfare Committee also joined forces in remembrance of homeless parties who had to end their lives in poor residences on streets, facilities, side rooms, and testimonials throughout the year and to restore homeless rights. From December 16th to 20th, we decided on <2019 Homeless Remembrance Week> and held various activities on December 22nd.

While some support measures like homeless welfare laws have been put into places as a result of various groups’ long activities, these have not reached far enough to changes in the lives of these people. Most of all, the biggest problem is the missing residential rights that constitute the very basis for restoring a humanlike life. We have been calling for an installment of living and safety standards for all inadequate residential facilities including Gosiwon, and plans for policies for the homeless to be able to live in adequate houses. Adding to that, we asked the government to make plans for death prevention of homeless and at the same time try to guarantee the right to health.

The most persecuted ethnic group, Muslim minorities who live in the northwest Arakan region of Myanmar, have been under deeply rooted discrimination and persecution for the last forty years. In 2016, the military and police of Myanmar, under the nominal reason of suppressing the Rohingya armed forces who have attacked a guard post of police, legitimized beating, killing, torturing, arbitrary imprisonment and punishment, mass rape, arson, and plunder. Even in 2017, a large scale operation of ethnic cleansing was conducted, killing tens of thousands. The villages were on fire, and Rohingya refugees, being victimized to mass rapes and assaults, set off on their routes of refugees. They arrived at a refugee camp in Cox Bazar, Bangladesh.

Ms. Eunkyung Cheon of PSPD Center for International Solidarity came back from a trip to the world’s biggest refugee camp, where about a million Rohingya refugees from Myanmar are staying. In order to spur attention and solidarity from the Korean society about Rohingya issues, the Korean Civil Society in Solidarity with the Rohingya and PSPD have hosted a Rohingya genocide memorial ceremony, special lecture with UN Special Rapporteur on the situation of human rights in Myanmar, talk with activists from the Free Rohingya Coalition, an international conference, and other various activities.

She attended the workshop for three days with ADI’s Rohingya activists who have been publishing genocide records per village. Fund for international partnerships, PSPD also supported essential electronic equipment to the activists like laptop computers and tablets. The latter three days were visits to the refugee camp, and meeting about a hundred survivors from six villages. Peoples of Rohingya who testified ruthless slaughter beneath swarming with flies, stanching air, flickering lightbulbs from the unstable electricity supply, have wanted not simple ‘support’ but ‘justice’.

Just during the trip, Aung San Suu Kyi has defended Myanmar’s military against genocide allegations made at International Court of Justice(ICJ) amid accusations of mass killings, rape, and expulsion of the Rohingya Muslim minority, and she was able to watch the scenes with the camp residents and hear what they have to say about this. After returning from the camp, she contributed related content to the Kyunghyang Newspaper and called for people’s attention in Korea. PSPD will continue to stand with the Rohingya until the Rohingya can go back to their home.