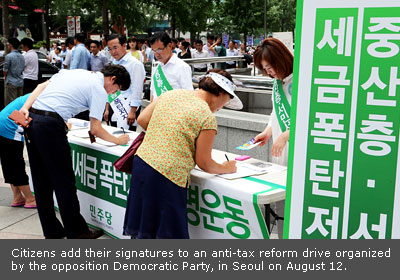 During Korea`s rapid economic development, family-owned conglomerates (chaebol) spearheaded investment and employment thanks to government financial support and a business-friendly tax structure. But export-led growth has not sustained high levels of job creation and economic polarization has worsened. The number of employed people per 1 billion won in value-added output fell from 156 in 1970 to 19.4 in 2012.

Despite the nation`s continuous “growth without employment,” the government has stuck to the low corporate tax rates under the pretext of promoting corporate investments and employment. Some people say that low corporate tax rates are inevitable due to corporate double taxation, departure of foreign investment and the high percentage of corporate taxes in government coffers. But double taxation was offset by a deduction on dividend income and tax incentives are offered to foreign investors for a certain period of time.

The high level of corporate tax contributions is due to the large tax base of the business community. The tax base has been enlarged by a swelling concentration of economic power, uneven income distribution and the difference in the maximum tax rates on personal income and businesses. In other words, the high amount of corporate taxes that the government collects is not material to the actual degree that taxes burden companies.

The maximum tax rate on corporations is 24.2 percent if local assessments are included. That is slightly above Britain`s 23 percent and Sweden`s 22 percent but far lower than Japan (37%), the United States (39.1%), Germany (30.2%) and France (34.4%). Considering the modest amount that the chaebol must pay into the national pension fund and various tax exemptions, their tax burden is much lower than perceived.

According to World Bank data, Korean companies` ratio of corporate tax and social security contributions to profits was 29.8 percent in 2011, substantially less than the OECD average of 42.5 percent. The corresponding figures for China, Japan, the United States, Germany, France and Sweden were 63.7 percent, 50 percent, 46.7 percent, 46.8 percent, 65.7 percent and 53 percent, respectively. Korean companies` total tax expenses are far from high.

Therefore, it is groundless to say that the current corporate tax burden deters corporate investment and accelerates capital outflows. In fact, there is little evidence that corporate tax cuts of the Lee Myung-bak government actually led to more investments and employment. But the reductions certainly weakened the government`s tax base as the Lee administration failed to overhaul the tax system and overwhelmingly favored large conglomerates.

According to data released by the National Tax Service, the share of large conglomerates in business tax exemptions and reductions rose from 62 percent in 2008 to 71 percent in 2011. The top one percent of companies accounted for 78.1 percent of the 9.3 trillion won in corporate tax cuts and exemptions in 2012.

In contrast, big businesses` contribution in job creation and investment growth was very disappointing. The share of companies with over 300 employees in the nation`s total labor force dropped from 8.4 percent in 2009 to 8.3 percent in 2012. Tax breaks have produced cash hoards, not investments. As of March 2012, the cash held by the 10 largest conglomerates was as much as 183 trillion won.

Chaebol reluctance to increase investments is unrelated to corporate tax rates. They hesitate because of fragile domestic demand and uncertainty in the protracted global economic slump. It is necessary to overhaul the entire wealth and income redistribution system to facilitate higher domestic demand and broader sentiment that the benefits of economic growth are shared evenly.

In reality, gaps are widening between large conglomerates and small and medium-sized enterprises and between regular workers and non-regular workers. Social bipolarization has been deepening. Tax increases for large conglomerates and the government`s aggressive wealth redistribution policy are reasonable alternatives that will boost domestic demand and promote stable economic growth.

Byung-Goo Kang, the dean of the Center for Tax Justice and Budget Priority , PSPD