Civil Society’s Declaration against GSOMIA between South Korea and Japan 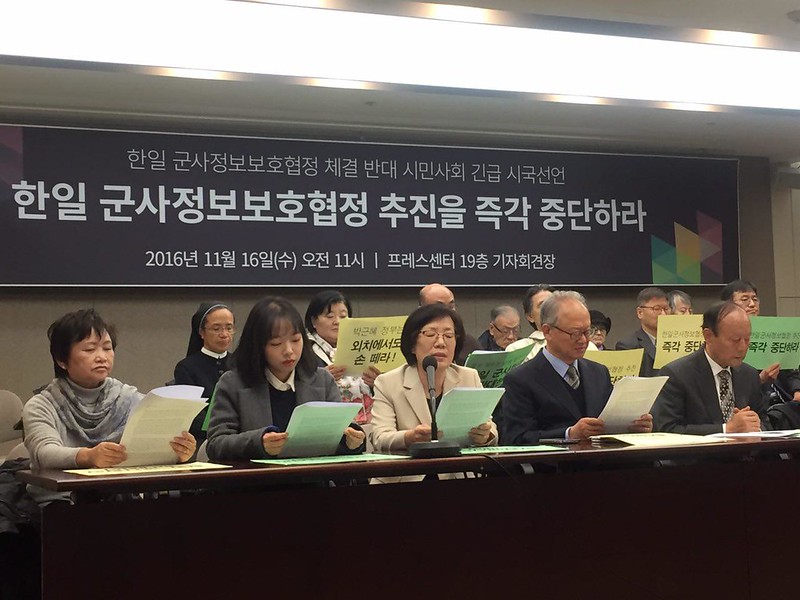 (16 November 2016, Seoul) We, 225 public figures and 113 civil society organisations, call upon Park Geun-hye administration to stop the signing of dogmatic, undemocratic and unpeaceful General Security of Military Information Agreement (GSOMIA) between the Government of the Republic of Korea and the Government of Japan. Both governments held the first meeting in Tokyo on 1st of November, the second meeting in Seoul on 9th of November, the third meeting in Tokyo on 14th of November and tentatively initialed the GSOMIA. The Park administration has already requested the legislative office for examination in an aim to ratify the GSOMIA within this month. We strongly condemn the government’s undemocratic decision and warn the Government to immediately stop negotiation on the GSOMIA.

We strongly protest against the way how negotiation process has been carried out in an unfair and non-transparent manner. As we all recall, this Agreement was secretly carried out to the point of initialing by Lee Myung-bak administration in 2012 and was ceased due to the strong opposition from the people. People were outraged by the fact that the government pushed ahead with the agreement without consensus from the general public with the power vested and the national assembly as the representative body of the government.

This undemocratic behavior is repeated and getting even worse. The Ministry of National Defense, which is mainly responsible for the GSOMIA has vowed until recently that forming general public consensus is crucial and that the “signing the GSOMIA can only be proceeded with conditions established.” Regardless, the Park Geun-hye administration has disregarded such conditions and without any attempt to reach a general public’ s consensus, it has decided to continue signing the GSOMIA like a military operation.

While South Korean people are angered and shocked by the recent Presidential scandal, the GSOMIA is being enforced. As proved by a million protesting on 12th of November, majority of people are calling for the President’s immediate resignation. As the Park administration has failed to carry out the constitutional responsibility bestowed by the people, it is not qualified to proceed the GSOMNIA. Paradoxically speaking, this GSOMIA negotiation clearly proves that the President must not be involved both in domestic and international affairs.

We are extremely concerned about the negative impact of the GSOMIA. The government has granted indulgence through abruptly settling on the Agreement on ‘comfort women’ to Abe Shinzo administration in Japan, which has been right wing-led and distorted its history of aggression. Signing the GSOMIA will rather encourage Japan’s remilitarization and exercise of collective self-defense. As the most affected victims of Japanese imperialism, we will not accept the government to blindly take such actions.

The GSOMIA will instigate the possible new cold war in Northeast Asia. Republic of Korea is the closest neighboring country to North Korea, an explicit enemy of the US-Japan alliance, and China and Russia, strategic competitor countries of US. The reason for the US-Japan alliance to include South Korea in their military strategy largely lies in geopolitical factor. The Korean Peninsula will be a strategic advantage as battle front and troop as the last resort. The South Korea-US-Japan Military Information Sharing Pact signed in 2014 and Terminal High Altitude Area Defense (THAAD) deployment decision made in this July are in the same context. Such South Korea’s trilateral alliance may raise increasing concern in strengthening the trilateral alliance between North Korea, China and Russia. The result will be a new cold war in Northeast Asia and exacerbation of arms race as well as permanent loss of peace on the Korean Peninsula. As the victim of cold war, we will not allow the re-emergence of a new cold war.

Some may assert that military cooperation with Japan is necessary in a pragmatic approach against the acceleration of North Korea’s missile and nuclear weapon threats. Nevertheless, the GSOMIA for trilateral missile defense system establishment will not assure South Korea’s safety. According to a report published by the US Congress Research Service (CRS) in June, 2013, it is assured that “South Korea might not benefit as much, because it is so close to North Korea that incoming missiles would likely fly on a lower trajectory and could arrive in a matter of minutes.” Considering our reality that we are still under ceasefire, this is a valid criticism.

Military approach like the GSOMIA will clearly not stop North Korea’s nuclear development. This is just expansive reproduction of a failed policy. This will only lead to self-harm result in the Korean Peninsula. This will erupt cold war in Northeast Asia in reality and waste valuable resources that should be utilized for welfare and proliferation of humanity not for military competition.

However, the Park administration has clearly proved that it has no will or capability to do so. It is gradually being disclosed that a shadowy advisor who is at the center of the corruption scandal has exerted extensive influence on domestic and international affairs but the government is still attempting to sign the GSOMIA. '

We will never accept such a historical regression. We can no longer trust the government that has lost ability to realize the seriousness of the issue and the President Park Geun-hye has no credibility, qualification or capability as a leader of this country.