The Government of Bangladesh should release a labour leader Mrs.Moshrefa Mishu immediately!

The Government of Bangladesh should release a labour leader Mrs.
Moshrefa Mishu immediately! 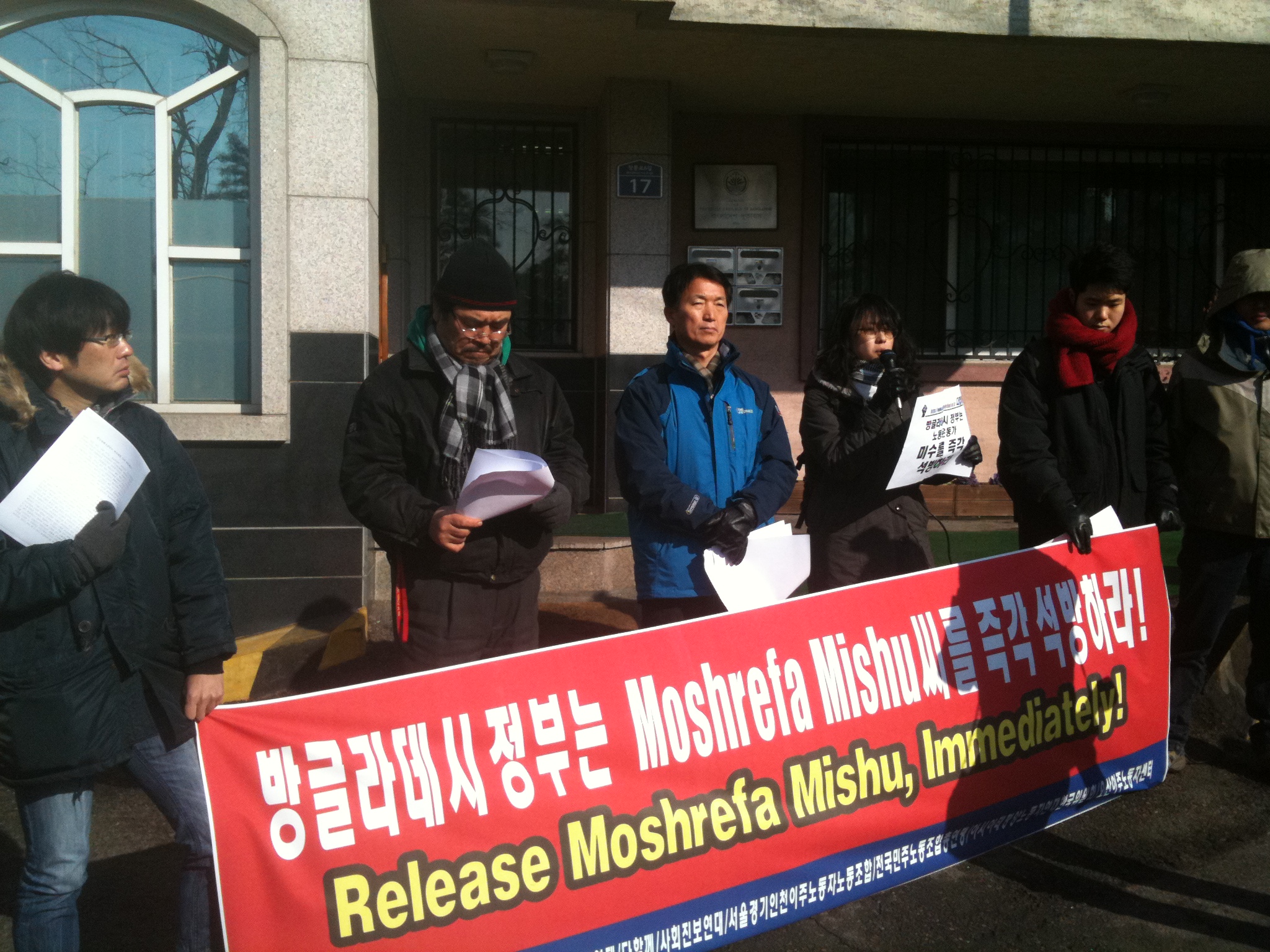 Mrs. Moshrefa Mishu (46), President of the Garment Workers Unity Forum
(GWUF), was illegally arrested by the Dhaka Metropolitan Police at around 1am on
14 December 2010. According to Mrs. Mishu, she had been under intelligence
surveillance and the Dhaka Metropolitan Police illegally arrested her without an
arrest warrant. Also, the Bangladesh government neither allowed Mrs. Mishu, who
suffers from asthma, to take necessary medication nor provided her adequate
medical treatment. As a result, her condition has seriously deteriorated while in
detention. Furthermore, the Bangladesh government threatened Mrs. Mishu with
death if she refused to cooperate with the government, while interrogating her for
her union activities in garment industry for over 20 years. It is obvious that the
arbitrary detention and ill-treatment of Mrs. Mishu is the irrational repression to
labor movement by the Bangladesh government.

We are more concerned by Mrs. Mashu's case because her arbitrary detention is
closely related to the recent massive protest organized by the garment industry
workers on 12~13 December 2010. This protest was triggered by the workers of the
Korean company called Youngone Corporation, the biggest garment factory in
Bangladesh. As been reported in the Korean press, thousands of workers protested in
the center of Dhaka as well as the Chittagong free export zone (FEZ) where
Youngone Corporation is located, and called for the increase of the minimum
montly wage and improvement of working conditions. However, the Bangladesh
police brutally suppressed protesters by using rubber bullets and tear bombs and as a
result, four protesters died and over 200 were injured. Garment exports account for
80 percent of the county's total exports and several Korean companies including
Youngone Corporation are standing on the heart of garment industry. The December
protests became the momentum that raised big concern over the miserable condition
of the Bangladeshi workers within the Korean society. More Korean people are now
urging that the Korean garment companies in Bangladesh should be held
accountable for the December crisis.

We strongly criticise the Bangladesh government's illegal detaining of Mrs. Mishu
and denying to provide her a proper medical treatment. These acts by the
government, which clearly violated international human rights laws, is very
shameful behavior and should be strongly blamed. We also urge the Bangladesh
government to immediately stop arresting and abusing the union activists. It is
shame to see that the Bangladesh government is repressing the labour leaders rather
than making any effort to improve the severe working conditions of workers. Such
repression by the Bangladesh government eventually forces workers to work under
the poor work conditions with very low wages, while being the effective method to
increase Foreign Direct Investment (FDI) outflows. This gives us clear signal that
the Bangladesh government would continue to violate rights of workers and ignore
international criticism. The anti-human-rights capital attraction fever which is
representing as free economic zone and free export zone in all the corners of the
world including Bangladesh and Korea made the workers' daily lives worse like a
misery. In this regard, Mrs. Mishu's suffering cannot be separated from ours and we
will strongly fight for Mrs. Mishu with solidarity.

We particularly urge that the government of the Republic of Korea and Korean
companies should also take responsibility for Mrs. Mishu's case. Many Korean
companies entered Bangladesh market by taking advantage of the Bangladesh
government's low wage policy and anti-union policy, and are highly contributing to
build up the vulnerable conditions for the workers. Youngone Corporation has
claimed that the massive workers' protests triggered from its own factory in
December, must be controlled by external powers and kept denying its own
responsibility. However, when it comes to take a close look into the purpose of
operating its factory in Chittagong FEZ, it becomes very clear why Youngone
Corporation should be held accountable for the December protests. The workers in
the FEZ are denied to wield the right to take collective action, while the FEZ
authorities has absolute power over the issues such as the workers' wage negotiation,
the employment and dismissal of workers. If the benefited Korean companies would
not take responsibility for the damaged workers by the benefits, then who should
take responsibility for this? It is clear that the Korean companies are benefitted by
the Banglacdesh government's abuses against workers. In this regard, Korean
companies are also responsible for Mrs. Mishu's illegal arrest, detention, and illtreatment
by the Bangladesh government.

We, the Korean civil and union groups, strongly call for Mrs. Mishu's immediate
release. Standing in solidarity, we will continue to fight together with Bangladesh
workes until Mrs. Mishu is released and workers achieve three basic labour rights
and live like a human being. All the workers are the one; no one's human rights
should be violated!