PSPD’s campaigning on conflicts of interest among high ranking government officials goes back to the year 2003 when PSPD demanded that the former Minister of Science and ICT, Jin Dae-je, sell his Samsung Electronics shares. Even though a blind trust system was introduced in 2005, conflicts of interest and issues surrounding non-declaration remain.

On April 22, PSPD’s Center for Administrative Watch published a ‘legislative proposal and an evaluation of the current draft bills on avoiding conflicts of interest among high ranking government officials.’ They did this by comparing the original Prohibition of Corruption and Favors Act that the government proposed to prevent conflicts of interest back in 2013, with the latest draft bill submissions to the National Assembly.

The proposal includes various aspects. If there is a concern over a conflict of interest, the officer needs to be excluded from the position involved, and employment of his/her family members by the related organization should be limited. Using unannounced information to pursue personal interests must be prohibited and contacts with retired government officers need to be restricted. Considering the consensus around conflict of interest in society, PSPD urged the National Assembly and the Administration to rush the enactment of the Avoidance of Conflict of Interest Act (Provisional).

Professor Ryu Young-Joon is a public-interest whistleblower who revealed the fabrication of evidence for a paper regarding stem cell research by Hwang Woo-seok. In 2016, during a TV interview, Ryu raised a question over whether Hwang attended a meeting hosted by the blue house where he asked for the approval for stem cell research at Hospital Cha. He also asked whether the easing of regulations on stem cell research was connected to either former president Park Geun-hye or the influential figure, Jeong Yoon-hoi. As a result, Ryu was sued for defamation by Hwang, but was sentenced not guilty in the court of the first instance.

However, the prosecutor’s office appealed this ruling and demanded in the appeal court that Ryu received a year prison sentence. PSPD’s Public Interest Law Center collected online signatures from 657 citizens to support Ryu and delivered them to the court. Ryu was found not guilty in the appeal court. The use of lawsuits to silence public-interest whistleblowers is an issue that needs to be resolved in our society. 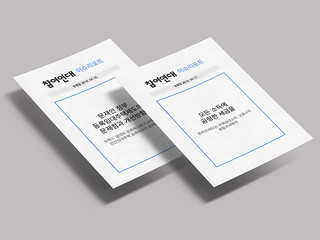 Due to its encouragement by the Moon Jae-in administration, the volume of privately-owned public housing rose to 1.4 million as of the end of March 2019. As registered public housing, leases are for 4 or 8 year periods and rent increases are limited to 5%. This helps with stability for tenants and prevents excessive speculation on real estate.

PSPD’s Center for People’s Livelihood Improvement published a report to identify problems in our current privately-owned public housing registration system by comparing it to that of New York City since 1984. The report showed that the current system fails to mandate information disclosure, such as the current status of the housing and rent history, when rental issues arise. It also showed that there are excessive benefits to owners, such as property and income tax reductions, while obligations are minimal. In addition, efforts to inform tenants of their rights or to notify them on the registration of the house remain inadequate as a proper management system is not in place. Therefore, PSPD urges the administration to amend the Housing Lease Protection Act as soon as possible.

To ensure the protection of tenants’ rights, real estate agents need to adequately understand the rights and responsibilities of tenants and landlords alike and explain them to both parties. PSPD sought answers from the Ministry of Land and Transportation, over the training and qualifications at the Korea Association of Realtors; the issue of registered public housing; and the rights and responsibilities of tenants.

Although the publicly-listed real estate prices in 2019 are an improvement on the previous year, it is extremely low compared to the standard set by the Real Estate Public Disclosure Act. PSPD’s Center for Tax Reform analyzed the publicly-listed prices provided by the Ministry of Land and Transportation and found that missed taxable income would reach 4 trillion KRW due to the differences in publicly listed prices. Among them, the biggest beneficiaries of the mishap are the owners of real estate worth over 900 million KRW, which are subject to general property taxes.

The effects of taxation on reducing inequality in Korea, as measured by the Gini index, remain very limited. Taxation reduces the Gini coefficient by a mere 8.7%, which is much lower than the OECD average of 31.3%. Korea does have progressive taxation but fails to lower inequality due to tax exemptions, improper taxation of rental income and the separated filing of capital gain taxes, all of which reduce the tax burden on higher income earners. 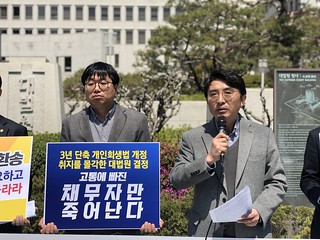 In the previous Personal Bankruptcy Act of 2005, debtors had to repay up to 5 years of debt. Since the new legislation in 2018, which PSPD took part in proposing, the repayment period has been shortened to up to 3 years. Such a proposal was based on the belief that forcing people to repay debts from more than 3 years places too much burden on individuals. Based on this legislation, the Seoul bankruptcy court prepared guidelines to shorten the repayment period and started applying this from January last year, prior to the laws passing in June 2018.
However, on March 19, the Supreme Court overturned the Seoul bankruptcy court’s decision to reduce a debtor’s repayment period by 13 months, due to the fact such people had already suffered living under guaranteed minimum income for 47 months.  The Supreme Court’s ruling not only goes against previous rulings, related to the introduction of the Integrated Bankruptcy Act, to shorten the repayment period from 8 to 5 years but also contradicts the purpose of the new legislation.
Therefore, the PSPD’s Center for Economic and Financial Justice analyzed personal bankruptcy statistics from the past 5 years to evaluate the court’s decision, revisited the purpose of the amendment and pointed out problems with the Supreme Court’s ruling. The Center also held a press conference, alongside finance consumer activist groups, and criticized the court’s stance in favor of creditors. PSPD plans to urge an amendment to the legislation so debtors can apply for a shortening of their repayment period. We will be asking the court to consider improving the guidelines to allow various repayment plans such as 6 months, 1 year or 3 years. 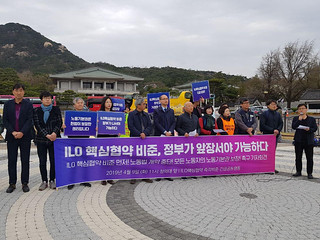 During Moon Jae-in’s presidential campaign in 2017, his campaign included pledges to ratify ILO conventions, such as CO87 and CO98, concerning freedom of association and protection of the right to organize, and CO29 and CO105, concerning forced labor. After the election, these were even included in his policy priorities. The administration claimed that they would first focus on getting a consensus from the Economic, Social and Labor Council, composed of labor, business, and government representatives, thus justifying postponement of ratification. However, the council did not succeed in reaching an agreement due to demands from the business representatives that would have violated labor rights.
PSPD’s Center for Fair Labor and Society joined the ‘Emergency Joint Action Committee for ILO main convention’s immediate ratification’ and has been pushing the government and National Assembly to speed up ratification of ILO CO87 and CO98. Through the joint action committee, PSPD worked to inform the public about the ILO conventions through press briefings and debates and worked towards ensuring that workers have the right to unionize. Furthermore, an appeal was lodged against Kim Hak-yong, chair of the Environment and Labor Committee at National Assembly, who claimed that Korea was not yet ready to ratify the ILO conventions, a claim which ignored the realities of the labor situation in Korea.
We continue to monitor the progress of this issue in the National Assembly and have asked him to withdraw his comment as well. As agreement in the Economic, Social and Labor Council is unlikely, the administration must draft a bill to ratify ILO CO87 and CO98 so it can be passed by the State Council and forwarded onto the National Assembly. The National Assembly then needs to move forward with the ratification bill in accordance with the procedures set out by the constitution.
Korean Version >>
이 게시물을