The New Year has come. Best wishes for a happy new year and I hope you all share happiness with neighbors. There have been lots of changes in our society in 2017 and we have sincerely dreamt for those changes. By and with the power of the people, PSPD has been trying to make people’s dream come true. It will work harder to make more changes and try to be with more citizens in 2018. Let me introduce what PSPD has done in December 2017 as follow.

In 2017, PSPD has taken down Park Geun-hye administration with and by the power of the people. Prosecutors Office Act has been reformed that expedient dispatching prosecutors to the office of the President is prohibited. The Ministry of Justice is cutting out connections with prosecutors step by step. Anti-corruption Act has been changed to protect teachers who report corruptions in private schools. Entrance fee to tertiary educational institutes is abolished and Yongsan horse racing screen gambling is closed. Children’s allowance is established and corporate tax is increased for top companies in terms of sales. Patriot education of the Ministry of Defense is stopped which only focused on confrontation of South and North Korea and hostility to each other. The government has withdrawn the claim for damage from Gangjeong residents who protested against Jeju Naval Base construction.

The above are all what PSPD has demanded and worked for a long time, and there are still more to mention. These achievements are partly because a new government is inclined to progressive but aren’t possible without consistent efforts of PSPD. Wrapping up 2017 and planning for 2018 have started since mid-December last year. The first discussion of General Meeting Preparation Committee was held on 11 December. Colleting opinions and hearings for members will be held in January 2018 and I hope you all participate in the process. 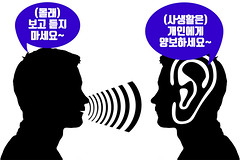 PSPD opposes to indiscriminate information collecting executed by National Intelligent Service and investigation authorities. In the line with this, PSPD has requested to review constitutionality of NIS’s packet monitoring to the Constitutional Court in March 2016 in cooperation with Jinbo Network Center and Catholic Human Rights Council. Packet Monitoring, a new term to most citizens is watching internet line itself. In other word, it allows to see and hear all activities done using the internet by a target subject. The bigger problem is anyone who shares the internet with a target subject regardless of wired or wireless are at risk to exposure. 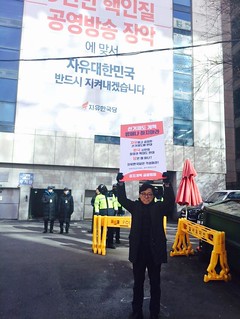 During 2017, PSPD has been a core organization of <Joint Action for Political reform> which works together to reflect people’s opinions in reforming the Election Act. It has asserted seat allocation according to votes gained by party (Mixed-member proportional representation system), change of restrictions concerning the right to vote such as lowering down voting age and abolition of Article 90 and 93 of the Election Act which regulate voter’s right to expression. However, it has been blocked by sluggish politicians and conflicts of interests. Hence, PSPD and civil organizations carried out one-person demonstration relay in front of the National Assembly and Liberty Party Korea during December. In addition, PSPD requested constitutional decision on 13 December 2017 in respect to limiting voting franchise to 19 years old of age or above of the Public Official Election Act. 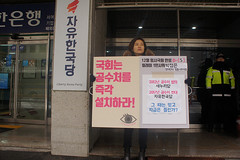 Liberty Party has refused to review the bill of establishing an investigation bureau for high-ranking public officers since 21 November. It is one of measures to reform prosecutors and to clean up corruptions related to power and authority. PSPD has suggested adoption of a special investigation bureau in 1996 for the first time but it had faced organizational resistance of the Ministry of Justice and prosecutors all the time. However, it is an election promise of Moon administration and resistance of prosecutors are much weaker now. Nevertheless, it has failed to pass the National Assembly because of opposition of Liberty Party.

Therefore, PSPD has executed intense actions urging Liberty Party to participate in the bill review and to pass it to establish an investigation bureau for high ranking public officers.

<2017 Public whistle Blowers’ Night and Righteous Citizen Award> was held at the Seoul Press Center on 1 December. PSPD has held Public Whistle Blowers Night since 2010 in order to remind importance of whistle blowing for public interests and express gratitude to their courageous actions. Furthermore, PSPD also has made Righteous Citizen Award to remember their courage and sacrifice.

PSPD and Minbyun have filed a bill of indictment to the prosecutor office on 7 December in regard to slush fund of DAS which is suspected to be owned by a former president Lee Myung-bak. Allegations are embezzlement and tax evasion of Lee Sang-eun, a CEO of DAS and real owner whose name is unknown. Jeong Ho-young, a former BBK special prosecutor is also reported for the charge of neglecting his duty by conniving illegal acts.

Recently, following allegations have been raised by several media. △ In early, 2008, 12 billion won was found from 43 accounts owned by 17 people and it has been deposited to DAS accounts by transferring to other names or depositing again after closing accounts △ Despite Jung Ho-young, a special prosecutor has confirmed borrowed name accounts, he covered it up under the condition of depositing them to DAS accounts △ Accounting treated it as internal transfer from DAS corporation in overseas

12 billion won taken care by accounts under 17 names is likely to be a slush fund of Lee Myung-bak who is consistently suspected as a real owner of DAS. If that is true, Lee must be punished for embezzlement in aggravated punishment of specific economic crimes or tax evasion in aggravated punishment of specific crimes. Most of all, if Jung Ho-young found the facts but connived it, he also committed a serious crime.

This case was allocated to Seoul Central Prosecutors Office in the first place. However, Yoon Seok-yeol was just one of superintendent public prosecutors dispatched to Jung’s BBK Special Prosecutor Team in 2008 and investigation on slush fund including finding a real owner of DAS did not make progress because of various reasons. Fortunately, an investigation team is formed at Eastern office of prosecutors and has started working on 26 December. Besides reporting to the prosecutors, PSPD has reported DAS and real owner to National Tax Service for evading corporate and income tax and requested Financial Service Commission to investigate allegation on borrowed name accounts which seem to be actually owned by DAS and take following action to correct it.