21 victims of the unfair hiring practices won against Kangwon Land 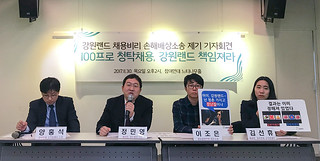 On August 19th, the court partially decided in favor of the victims of the unfair hiring practices of Kangwon Land in their first trial of the damage suit. This is after four years since PSPD represented the victims and filed the lawsuit. The incident was alarming as 518 newly employed workers of Kangwon Land in 2012-2013 were all there through connections and favors. At the time, Kangwon Land received favors from its employees, members of the National Assembly, and regional powers, in sum, ‘the ones in power and background’, and kept a list from their pleads, largely admitting even the ones that didn’t have enough credentials.

The court decided that the former CEO of Kangwon Land, Choi Heung-jip, violated the trust and expectation of the plaintiffs that the process would be fair and equal, and inflicted mental damages as a result. It is a relief that the victims could have been compensated at least in part through this ruling. However, how can the misery of numerous job-seeking youth ever be compensated? This case of PSPD Public Interest Law Center will lead to the second trial by the appeal of Kangwon Land. We hope the court will find fault with Kangwon Land that violated the trust of equality and present a meaningful result that can sever unjust and corrupted employment processes prevalent in Korea.

Activities regarding hateful expressions of Naver

The PSPD Youth Council has been problematizing hateful expressions that can be easily seen in online agoras, such as in news articles and community boards. According to a poll targeting Naver users on experiences of exposure to hate speech, 236 of 275 respondents, 85.5%, have been found to have encountered hate speech while using Naver, which is a portal website that is an absolute first when it comes to search engines, Facebook, Instagram, Youtube, and other global SNS platforms define hateful expressions in their user’s agreement and include regulatory articles on content that include such materials. Kakao, a domestic service provider, also states regulations in their agreements in accordance with the 2019 hate speech uprooting policy. In contrast, Naver does not have the regulations codified. Instead, they only have a system of reporting comments and posterior measures such as ‘clean-bot’ to blind abusive and slanderous languages.

However, according to the monitored results, this reporting system of Naver turned out to be nonsense. Just as the behavior of an ostrich, the hate speech was only blinded on the reporter’s account, while the expression in question was exposed to all the others except the reporter. PSPD Youth Council openly submitted a written question, asking Naver to clearly state regulations on hateful expressions in their user’s agreement. We hope Naver would respond to the people’s request on forming a safe online space where various voices can coexist.

The Enforcement Decree of the Severe Accident Punishment Act should be properly made! 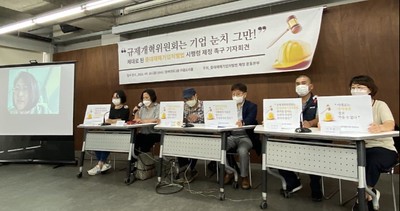 100,000 people signed the National petition to bring a change to the disastrous reality of over two thousand deaths of workers due to industrial accidents, and finally, the Severe Accident Punishment Act was enacted early this year. However, last July, the enforcement decree suggested by the government-held backstepping contents from the establishment purposes of the Act. The range of occupational diseases was excessively cut down to limited categories centered around acute poisoning, and appropriate personnel and budget for precautionary measures, such as working as groups of two, also could not be found. Another problem is about how the safety and health monitoring job was outsourced, and death from overwork and workplace bullying was also ruled out.

PSPD Committee for Fair Labor Society announced a statement on the enforcement decree to present how the current decree cannot possibly prevent severe accidents, and along with 1,180 signatures of workers and people, submitted it to the government. We will do our best to see an Enforcement Decree of the Severe Accident Punishment Act that can protect the safety of the workers and the people.

The Constitutional Court must accept the impeachment of Lim Seong-geun, the judge who meddled with trials

In February 2021, the National Assembly passed a resolution to impeach Judge Lim Seong-geun who intervened in trials before his retirement. This was the first case of a resolution to pass the Assembly in four years since the intervention was first revealed and the civil society including PSPD demanded impeachment. The resolution was passed on to the Constitutional Court, where the last pleading ended this August. Now what is left is the final decision on the impeachment prosecution that will be in October.

Years passed since all were in fury when the judicial manipulation incident was revealed in 2017. Acquittals were repeatedly given to judges involved, under the formal logic of the court, while the partakers took their positions in leading law firms, as professors, etc. The court which promised internal disciplinary measures and self-reformation did not show any changes from before. Now is the time to check once more on where the fact-seeking and holding ones responsible for the judicial manipulation incident are stopped, and what could be a detailed task on reforming bureaucratic judicial administration that was at the core of the problem. PSPD hosted a symposium last September 25th titled “Court after the judicial manipulation: where is it and how should it be remade”, and started a discussion as a society on which direction our judicial system should move towards.

Continuous extreme choices made by the owner-operators damaged by the COVID-19, omnidirectional measures need to be taken. 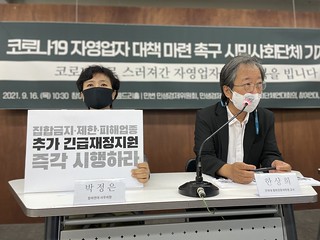 Due to the prolonged COVID-19 situation, more and more small and medium-sized retailers and owner-operators are making extreme choices to end their lives day by day. They were mostly working in sectors directly hit by the virus, such as fried chicken places, pubs, and karaokes. Civil organizations such as PSPD, Committee on People’s Livelihood and Economy of Minbyun, and People’s Livelihood Economy Research Institute held a press conference on September 16th to demand omnidirectional measures to the government and the National Assembly instead of temporary aid.

Until now, the pain and damages from preventing the spread of COVID-19 were mostly pushed on to the small and medium-sized retailers and owner-operators, while supporting measures for them were fragmented and extemporaneous. Even though the restrictions on the meeting were for the cause of the public interest and was necessary, the economic loss some had to suffer because of it should be properly compensated for. Immediate additional financial aid should be granted to sectors damaged due to the restrictions, and the term of the loans should be extended to a period after the end of the crisis. In essence, the Commercial Building Lease Share Act should be urgently handled in order to deal with the problems in the share of lease and the restrictions on the eviction. Even though the aids and loan measures are upsized, the problem of the lease should be essentially dealt with in order for those measures to be effective. This is a time to search for every possible legislative and policy measure in order to stop deaths that are occurring in succession. We will continue to act to overcome the crisis on people’s livelihood under COVID-19.