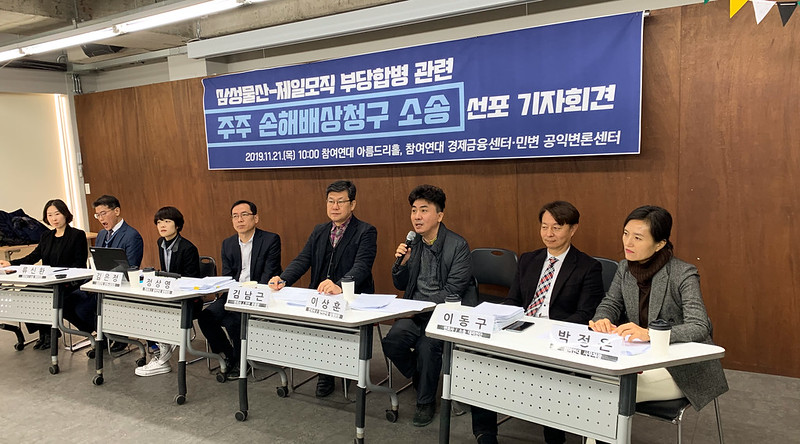 Seek the Truth on The Samba Accounting Scandal for Lee Jae-Yong’s Succession!

Small Shareholders Work Hard for the Normalization of Korean Air!

We persistently continued to raise issues on Lee Jae-Yong’s succession through illegal activities like Samsung Biologic’s accounting fraud and Samsung and C & T’s illegitimate merge. By publishing <The Research Report on Proper Merger Ratio of Samsung and C&T> and the <The Compiled Report on Lee Jae-Yong’s illegitimate Succession and the Case on Samsung Biologics Fraud>, we confirmed that the legitimate ratio and the actual ones have a clear difference, that Vice Chairman Lee Jae-Yong has gained 3.1 to 4.1 trillion won, and the national pension has lost 520 billion to 750 billion won.

For the first time in the history of Korea’s capital market, the former Samsung C&T private shareholders had arranged a lawsuit against its family members and board of directors and also sued under the accusation of Vice president Lee Jae-Yong’s involvement in the Samsung Biologic’s accounting fraud as well as violating the Capital Market Act.

In order to maintain complete control of conglomerates by the families that started and still continue to run them, all forms of illegal and illegitimate activities take place. PSPD has called for the introduction of the National Pension Fund's Trustee Responsibility Principle (aka the Stewardship Code) to prevent the tyranny of conglomerate family members, increased corporate value by actively exercising shareholder rights, and has demanded the active exercise of the National Pension Service's shareholder rights for companies with governance issues, such as Korean Air.

PSPD has organized the ‘Citizen Action on the Normalization of Korean Air’ union together with Korean Air’s labor union and employee solidarity and has pressured the National Pension to exercise the right to vote against the continued leadership of President Jo Yang Ho. In a short period of just two weeks, 51,907 (0.54%) shares were delegated to 140 Korean Air shareholders, which is the first time in history that minority shareholders were able to participate in the General Assembly and contribute to put an end to embezzlement and succession.