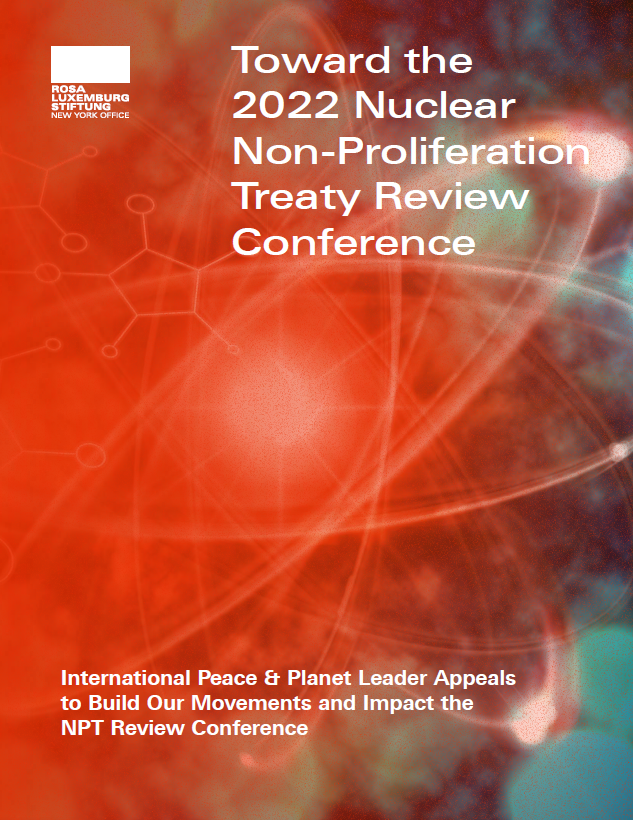 to Build Our Movements and Impact the NPT Review Conference

The Nuclear and Conventional Arms Race in the Indo-Pacific Region

and a Solution to the Nuclear Conflict on the Korean Peninsula

Lee Tae-ho Director of Center for Peace and Disarmament,

The historic Treaty on the Prohibition of Nuclear Weapons (TPNW) became live last year (2021), signaling a significant step towards a world without nuclear weapons. However, the reality is that any progress towards nuclear disarmament and non-proliferation is actually stagnating, and some would say retreating. In particular, the arms race and conflict in the Indo-Pacific Region, an area where the nuclear-armed states are concentrated, is undermining any vision for a world free of nuclear weapons. Centered around the political, military, and economic conflict which the US has labeled ‘US-China Strategic Competition’, nuclear-armed states such as Russia, the UK and India are increasing their nuclear weapons in the name of military alliances or military cooperation. The US is enhancing its nuclear arsenal. Australia, the US, and the UK announced that they plan to assist Australia in acquiring nuclear-powered submarines through the AUKUS alliance. China is strengthening its military cooperation with Russia in the Western Pacific region, whilst increasing its nuclear weapons stockpile with the justification of it compensating for its inferiority in nuclear capability when compared to the US.

In the midst of this vortex lies the conundrum of nuclear problem on the Korean Peninsula, where the armistice has continued for more than 70 years. The precarious armistice on the Korean Peninsula and the DPRK’s nuclear weapons and missile programs are serving as a catalyst for the nuclear and conventional arms race in the region, along with the problems of the Taiwan Strait. There have been several opportunities to block the DPRK’s ambitions to develop nuclear weapons and fundamentally resolve the nuclear issue on the Korean Peninsula following the end of the Cold War. However, several important agreements were not implemented, and the DPRK is not solely responsible.

In the 1990s, following the collapse of communism, the US was half-hearted in implementing the Agreed Framework between the US and DPRK, anticipating that the DPRK regime would soon implode. In the 2000s, the US neglected negotiations to resolve the nuclear issue on the Korean Peninsula, believing that it could control ‘rogue states’ by force. In 2001, President Bush unilaterally terminated the Clinton administration’s the US-DPRK Joint Communique and formalized a policy of preemptive nuclear war. It caused great controversy, as it shook the foundation of the Treaty on the Non-Proliferation of Nuclear Weapons (NPT) system. Above all, this policy effectively terminated Agreed Framework between the US and DPRK (1994), in which the DPRK was given a guarantee that the US would not use its nuclear weapons against the DPRK and in return the DPRK would give up its nuclear programs. Even in the Obama era, the US continued to impose sanctions and apply pressure in the name of ‘Strategic Patience’ rather than focusing on negotiating with the DPRK on the nuclear issue, while concentrating on perfecting the ROK-US joint military plan in preparation for the internal collapse of the DPRK regime.

However, despite many subjective predictions, the DPRK regime has survived. During this period, the DPRK pushed ahead with six nuclear weapons tests and tests of multiple means of delivery, challenging the international nuclear non-proliferation system. During the same period, events in the so-called ‘rogue states’, as identified by the US, sent a frightening message and provided an excuse for the DPRK to claim its right to ‘self-defense by nuclear weapons’.

In 2018, not only the people of the Korean Peninsula but also others eagerly anticipated great strides towards peace. The US-DPRK negotiation process was considered to be the last chance to prevent the DPRK from possessing nuclear weapons and could provide important momentum toward stopping the international tide moving toward a new Cold War order. Negotiations engendered great interest from all those who yearned for a peaceful world without nuclear weapons.

However, the negotiations have been stalled following the collapse of talks about the level and scope of corresponding measures at the DPRK-US Hanoi summit in February 2019. The two years since then were not only the cessation of progress, but a period emerged of growing distrust and an ever-increasing number of obstacles to the resolving of the problem. While negotiations are halted and sanctions continue, the DPRK’s nuclear material stockpiles are increasing and its means of delivery improving.

Time is short. We need to find fundamental solutions to the problem and intensively encourage comprehensive peace negotiations.

Firstly, a strategy centered on actively improving relations and encouraging cooperation should be adopted instead of the unrealistic and failed strategy of trying to force the DPRK to abandon its nuclear weapons program through sanctions and pressure. The DPRK has been using the period of increased sanctions and stalled negotiations as an opportunity to further develop nuclear weapons. Moreover, it should be noted that severe sanctions that ban even the importing of needles in a pandemic era, and blocking  trade in daily necessities has had a catastrophic humanitarian impact.

Secondly, the denuclearization of the Korean Peninsula needs to be pursued through practical and comprehensive peace negotiations that also reduce mutual military threats in both directions. As of 2020, the annual military expenditure of South Korea amounted to 1.5 times total GDP of North Korea. Total military expenditure of South Korea since 2000 is greater than Total GDP of North Korea over the same period. This figure excludes US Forces in Korea and US augmentation forces available in the event of contingencies. The war scenario on which the ROK and US base their joint military exercise involves provocative plans such as preemptive strikes, massive punishment and retaliation, and the occupation and stabilization of the DPRK. The end of the Korean War, the establishment of a peace treaty, and the improvement of the DPRK-US relations should be prerequisites, or at the very least binding parallel conditions, for the denuclearization of the Korean Peninsula, rather than as a result of denuclearization.

Finally, the parties to the negotiation must make genuine and concerted efforts to resolve the nuclear conflict on the Korean Peninsula. The more they delay or marginalize the negotiations with the excuse of responding to ‘US-China Strategic Competition’, the more the DPRK’s nuclear militarism will gain strength.

Where do we begin?

Suspending the ROK-US joint military exercises and starting to revise an aggressive military strategy against the DPRK could be the minimum incentive needed to bring the DPRK to the negotiating table. It has already stopped testing nuclear and ICBM. Adopting an albeit symbolic declaration to the end of the Korean War and starting to improve relations, could also be the beginning of serious negotiations. The most important precondition is that the US and ROK, which possesses overwhelming nuclear and conventional military power, should take the initial steps toward reducing tensions and building trust. Among the sweeping sanctions against the DPRK that are ineffective and can cause serious humanitarian disaster, certain sanctions that affect people’s livelihoods should be lifted or eased.

Anybody wanting a world free from nuclear weapons should oppose the failed strategies that include sanctions and military pressure, and instead urge the relevant parties to engage in comprehensive peace negotiations towards a peace regime on the Korean Peninsula and a nuclear weapons free zone in Northeast Asia.